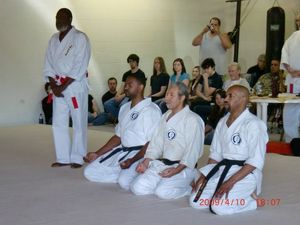 SanDoKai Karate is a fusion of Shobayashi Shorin-ryu Karate and Shotokan Karate methods that link both arts to their historical and metaphysical roots, which are traced back to Bodhisattva Vajrapani, the patron saint of the Shaolin Monastery.

Our first school in Long Beach, Ukinjukan, was also the first Shorin Ryu Karate School in the South Bay of Southern California.  At the time we were closely affiliated with the Shorin Ryu School in San Bernardino, which was led by Mickey Geneck and George Tolbert, two of my master’s students from the dojo in Okinawa.   Ukinju means quiet water, or to received water, and Kan is the house of.  Before the Shotokan influence, we were The House of Quiet Water.

Ukinjukan is the framework for SanDoKai, which is a “way” of martial arts practice, or the philosophy of martial arts practice. SanDoKai is aimed at inspiring each student to seek out and find the priceless jewel of self, then live among us in the silent knowing of; we are our brothers' keepers.  The physical, or martial art techniques that we practice as a method, are rooted in the fundamentals of whole movement and directness and has a Zen orientation.

Karate means “emptiness of hands.”  Kara, which is often translated as empty, means void. “Te” is translated as hand.   This void, according to the great masters, is actually the “Ku,” or the great mind.  Our classes are structured to help each student stage his or her own breakthrough by a meeting with the True Self or Ku.

Foundation of our Methodologies

Our roots are in Rendokan Shorin Ryu Karate as formulated by Grand Master Shimabukuro Eizo, and Shotokan Karate as taught by Master Tsutomu Ohshima.

The third element of our practice goes nearly unnoticed by the beginner; it can only be realized through the art of conscious living.  At this level, the practitioner finds the freedom to self-experiment through basic martial arts movements, while developing his or her personal spirituality and sense of being.

The breakthrough is unique to each student; it happens in an “oh!” moment.  No outside force can decide when, or how a breakthrough happens; it is on the far side of rank, external rewards, or recognition; it is a shift in consciousness where the student gets a glimpse of the teachings, and intuitively knows the way.  These citizen warriors, family members, friends, and fellow travelers—regardless their culture, ethnicity, their gender or their social or economic status—keep the spirit of dojo alive.

Our motto is “Go Forth.”