Information include excerpts from several sources including Wikipedia

Kata is not an exclusive term to the martial arts, it rather implies a formal way of doing something, and has a deeper meaning that is connected to almost every aspect of life. There is a formal tea ceremony; there is formal dojo etiquette, and a form method of greeting someone—particularly seniors, elders, and significant persons.  There are two translations of the kanji for kata. One is a vessel for holding water, 形 the other is punishing the ground, or forming a mold from earth. 型

Karate is a discipline of the mind and body as much as it is a martial art; its roots are in antiquity.  Generations of masters have transmitted their knowledge and secrets to the next generations through kata—a series of movements and techniques that are practiced in a pattern, each designed to teach a central principle or a set of common technique which are done at a certain speed and tempo.

There are many variations to kata, depending on interpretation and their transitions from soft to hard styles. The point to keep in mind is that most schools have their essential roots in Chinese forms, which blended both the heard and the soft.

Why it is important to Practice Kata 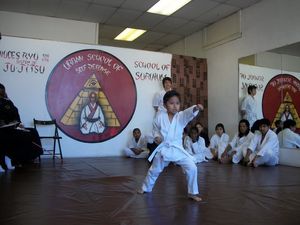 Practicing Kata is an essential element of effective Karate training. Karate, whose value for the well-rounded development of strength, coordination and agility is scientifically validated, requires no special equipment and can be practiced through Kata at any time, in any place, for any length of time, by people of all ages. Practicing Kata requires endurance and commitment that transcends the mere physical. Kata techniques foster the development of good moral character and spiritual qualities that include courage, courtesy, integrity, humility and self-control.

Kata is a systematically combined series of defensive and offensive paired units of techniques performed in a sequence against one or more imaginary opponents, in a symmetrical, linear pattern, that begins and ends in the same place. These techniques include punching, blocking, striking and kicking.

The basic movements are the fundamental defensive and offensive movements of fighting. Students must practice these fundamentals until they become an instinctive part of their character. They are divided into five categories; ready stances, stances, attacking techniques, and blocking and kicking techniques.

Practice of the basic movements enables a student to achieve a natural, beautiful, swift, stable, and powerful performance of Kata. From this come the reflexes and spontaneous movements necessary for successful defense and offense in actual combat.

To train the body properly, constant repetition of Kata movements is required. Only long and extensive repetition enables the student to fuse all of his strength into the movements.

Kata training is superior exercise. It requires the body to move in all directions so there is uniform development. There is no danger of overexertion or physical exhaustion. As the student’s body is built-up and the techniques become more skillful, the movements naturally become more powerful. The amount of exercise entailed increases naturally as the training progresses. Thus, through Kata, the transitional and basic movements combine with proper breathing to produce the vital power of karate.